We are pleased to share another heartwarming holiday story written by our good friend and customer, Jann O’Leary Costa

Many years ago, I lost an Airedale. He was very friendly, and I assume someone just picked him up. I hope so, I looked for him for about a year, calling every shelter, placing ads, driving around back streets. No luck. At one point in my search, I got a call from a shelter several towns away. One of the volunteers said they had an Airedale, which was unusual. They didn’t see many. It was about 45 minutes away so I wondered how he might have gotten so far. He’d have to have taken a bus. But hoping against hope, I drove to the shelter. Any possibility was worth investigating. When I arrived at the shelter, the volunteer was waiting outside. She was very enthusiastic and as I learned later, particularly good at her job. She had found this dog about the same time as mine went missing. He had been at the shelter too long, but she couldn’t let them destroy him. She had been taking him home so no one would be the wiser. She would go and get him. She had peaked both my interest and my hopes.

She returned in a few minutes with the homeliest dog I had ever seen. This was no Airedale! This was a brillo pad with legs. It had a long tail and curls everywhere. They had named him Jumper. I was beginning to get the picture. But he was very friendly and needed a home. I decided to take the orphan. I had a 50-acre farm at the time and had 2 dogs at home. If we found our Airedale, there was room for one more. The name had to go, however, so we named him Scrufty. It fit. I took him home and smiled all the way. 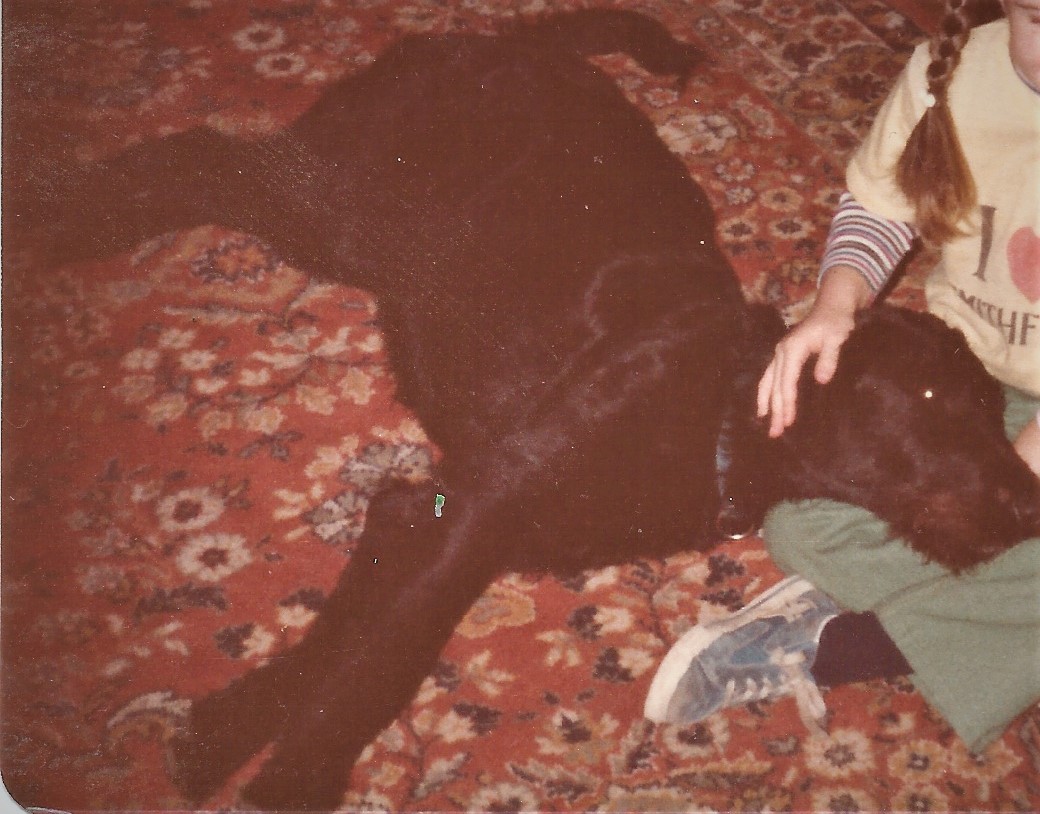 He was only home a few days when I realized there were other problems with this dog. Although he was full grown, he had no manners at all. It was obvious he had never been trained. He didn’t listen, didn’t come when he was called and had a mind of his own. But he had character and he was funny. It was hard not to like this dog. But even with all his charm, it became apparent he needed to behave. I was running a large horse boarding facility at the time and had clients coming and going all day. For Scrufty, this was like Disney World. If visitors to the farm left their windows down, even 10 inches, Scrufty was inside. He would jump into cars, trucks, anything was fair game. He liked to steal, food especially. Within the first month on the farm, he had stolen and eaten pizza, cookies, tums, certs, and several lunches. His escapades weren’t limited to food, however. He also took and hid several UPS deliveries, before we realized what was happening. Visitors were usually greeted by Scrufty, carrying an empty box of Snausages. He might also be wearing a hat or sunglasses. I think it was a warning. I decided to take action. I called my vet and was referred to an animal behaviorist in my area. He trained all the dogs for the state police and he had an excellent reputation. I made an appointment for private lessons and was satisfied my problem was all but solved.

I arrived at Washington Canine Academy, with my black brillo pad in tow. The instructor patted my dog and assured me they had not failed yet. Poor guy, he had no idea I was about to ruin his record. We set off to work. The instructor and I took turns giving Scrufty instructions and waiting for the appropriate response. We would meet for an hour a week for the next three weeks and repeat this routine. At first, Scrufty seemed to be doing quite well, but soon things began to go very wrong. During our second session, the instructor asked me to command Scrufty sit by my side. He did. It was obvious to me, that Scrufty was leaning heavily on my right leg. Then the instructor told me to step away from my dog and give him the command to stay. I stepped away from my seated pooch who promptly fell over like a sack of flour. To make matters worse, he lay there on his back, inviting me to rub his belly. The instructor was not pleased. I could see things were beginning to go downhill. At the end of our third lesson, the instructor approached me with a serious look on his face. He said, “lady I cannot help you. This dog knows exactly what I want him to do. He just chooses not to do it”. He shook his head and walked away. He never charged me for that lesson. I looked down at my obedience school dropout. He wagged his tail. We went home.

Mr. Washington might have thought he failed, but Scrufty was behaving a lot better. Of course, we had also posted signs, warning our clients to roll up their windows. We also alerted UPS about leaving packages where Scrufty could get them. Despite his bad behavior everyone seemed to enjoy his antics, and actually encouraged him. He would eat anything: onions, pickled peppers, artichokes. I don’t think we ever found something he would turn down. He had won a place in everyone’s heart at the farm. Several months had passed since our educational failure, and Scrufty’s life of crime seemed to be over. Nothing had been stolen or was missing for quite a while.

Then one bright Saturday just after Christmas, my brother, his wife and two children arrived for a visit. My niece looked a lot like me and was special to me. I always enjoyed her visits. She was only 3 or 4 at the time. She jumped out of the car, with a big smile on her face, yelling “Auntie, come see my doll”. She was running toward me with her new doll held out for me to see. As she ran towards me, it happened. In a flash, Scrufty was out the kitchen door, ran between the two of us, grabbing the doll as he passed. It was so fast that, none of us realized what happened. Then the startled child started to scream, “My doll, my doll!” My brother and I took off through the woods, leaving my sister-in-law to cope with the distraught toddler. We last saw Scrufty heading through the woods, jumping logs, and clearing streams, with the doll in his mouth. The whole head was in his mouth, leaving the body and legs sticking straight out in front of him. We chased him for 15 minutes through prickers, swamp and bushes. He finally led us right back into the yard where he proudly spit the doll out at my niece’s feet, giving her this present for a second time. He was done and he was triumphant. The doll was unharmed, except she was missing a shoe. My niece was happy again and holiday peace was restored. When my brother and I caught our breath we all had a good laugh. I always thought Scrufty was just reminding us what he was capable of. His good behavior was his choice and we weren’t to forget it. We never did. 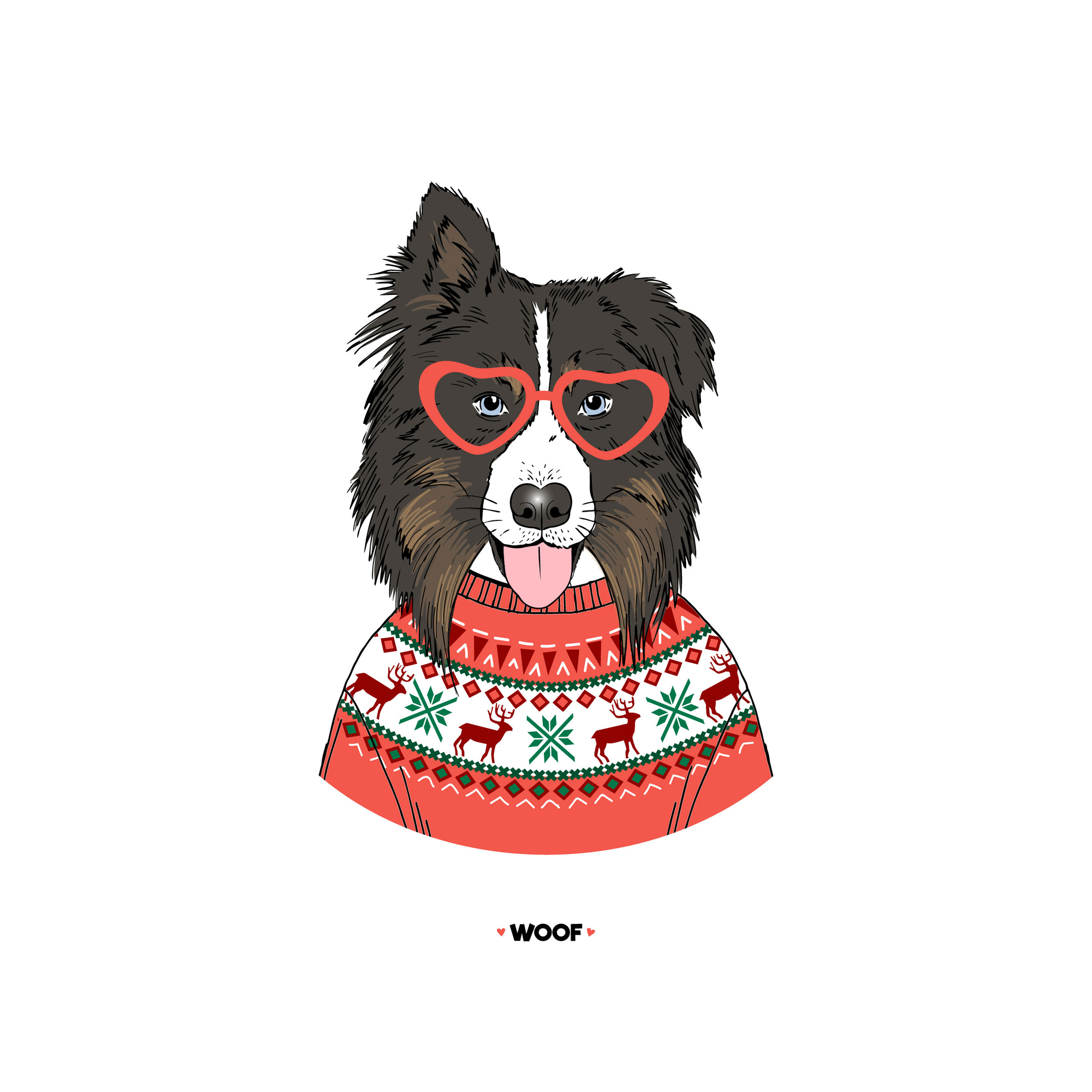 Scrufty’s story was written by Jann O’Leary Costa. Jann has had many careers including author, college professor, public speaker and animal rescuer. She and her husband own and operate JC Cutting Horses in PA. She is a full-time equine and pet therapist. The best part of her days are spent with all her rescue dogs and cats. You can read the rest of the book, Tails from the Heart on Kindle or contact Jann at JCCUTTERS2@AOL.COM